Hops are arguably the single most important ingredient in beer - in fact, a brew must contain hops in order to be classified as a beer. We'll talk a little more about the uses, origins and varieties below. So...Let's talk about Hops. 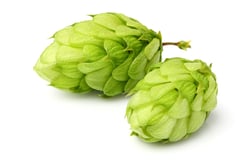 Hops are responsible for the bitter notes that balance the sweetness from your malt; as well as defining the flavour and aroma that has you coming back for more. They’re quite the contributor!

The hop plant is called Humulus Lupulus and looks strikingly similar to cannabis. They are in fact cousins, but rest assured, there is no THC in this one! The parts you need for brewing are the female hop flowers - pale green cones packed full of oils and resins.

The beer style most well-known for its "hoppy" flavours is the Indian Pale Ale (IPA), which was created when India was still a colony of Great Britain. Pale ales would be shipped over to the British ex-pats, but would always spoil during the voyage. With each shipment, the brew would be made a little higher in alcohol content and some extra hops would be thrown in to see if it could last the journey.

Eventually through trial and error, they found the perfect balance of increased alcohol content and added hops to preserve the beer from spoilage organisms - and so the IPA was born.

Hops have been used as a preserving agent long before the IPA existed though, with records in France/ Belgium showing it as part of the beer brewing process during the 9th century and the 12th century in Germany. There were, however, only a few hop varieties used and the broader range with differing flavours and bittering characteristics was developed more recently.

With the evolution of the craft beer scene and the natural creativity of a brewer, hop growers have been pushed to find new and exciting varieties of the plant that can deliver to the increasing demand. Over time, the traditional methods have morphed into a ‘who can get the craftiest’ competition, and as the drinkers, we’re certainly not complaining about the range of new beer options!

The timing of when your hops are added to your brew will have a big impact on flavour, aroma and bitterness. For a lot of beers, hops are a balancer - you wouldn’t know they're there except that all the flavours just seem to come together like magic. Hops added during the boiling step are primarily there to produce bitter notes and balance out the malty and alcohol sweetness. 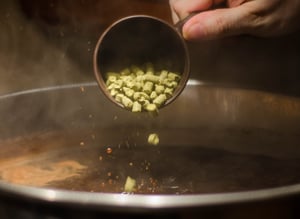 In Mangrove Jack's Kits, this part is done by our brewers, to make sure the bitterness is just right. For many craft beers a ‘dry hopping’ step means there is another addition of hops during or after fermentation. This produces more aromatic flavours and lets the lighter notes of the hops come through that would otherwise be lost in the boil.

Note: Some Mangrove Jack's kits (particularly in our Craft Series Range) contain dry hops which you can add according to taste.

To better understand the hops in your brew, checking the IBU can give you a good indication of how much has been used. International Bittering Units (IBU) measure the iso-alpha acids in a beer. During the boiling step, a process called isomerisation occurs which converts the natural alpha acids in the hops to iso-alpha acids. The iso-alpha acids are what preserve your beer and give it bitterness.

With hops being a plant, the place it is grown has a big impact on the flavour and aroma it contributes. The biggest hop producing countries are the United States and Germany, with the UK, Czech Republic, Australia and New Zealand also adding to the varieties. Hops can be broadly classified by what they are contributing to the brew (bitterness or flavour).

Heritage hops from Germany and the Czech Republic are called Noble Hops and are considered the most traditional for many lager and ale styles. They tend to have higher levels of aromatic oils and lower levels of alpha acids, so are less bitter.

English Hops give a very delicate and subtle flavour to a beer and are generally used in beers of UK origin. With a limited species compared to other areas of the world, these hops are highly sought after for their earthy, floral-herb notes.

American Hops being the source of many of the newest varieties of hops, have bold intense flavours. Citrusy, tropical and dank notes are often used to describe them. There is a huge range of varieties available in the US and they are now the biggest suppliers of hops globally.

Australian and New Zealand hops are biologically isolated from the other hops of the world, therefore, don’t have many of the diseases of the hops of the rest of the world. This coupled with the coastal growing region creates a range of flavours. From earthy and woody notes to fruit-led, these little gems are loved for IPAs and pale ales. Within each of these geographical groups there is a HUGE amount of variety, with each hop plant giving its own unique bitterness level and flavour compounds.

More detailed info on hop varietals to come, but all this talk about flavours has got our mouths watering - time for a brew!